The easiest way to purchase Kylix 2 Development is to click on this link. If you prefer the German edition use this link instead. By using either of these links to order Kylix 2 Development, I get a small percentage of the book sale. Thanks for buying the book!

Update: If you prefer the Portugeuse version, you can purchase it here.

Remember to look at the CD-ROM where you will find nine additional appendices, Kylix 2 Open Edition, Kylix 2 Enterprise Trial and the source code from the book.

Summary of the Book
From its simple beginnings, Linux has emerged as a powerful server operating system with a remarkable desktop environment and user interface. With Kylix, Linux developers now have a rapid application development tool for generating applications. Kylix 2 Development covers a wide range of topics from the simplest of client/server programs to the intricacies of writing complex multithreaded and multiprocess applications, including object-oriented programming, CLX components, dbExpress, DataCLX, WebSnap, Web Services, NetCLX, and CORBA.

Forward – by Steve Teixeira
To understand the importance of this work to the Kylix community, you need to understand a bit of history in Delphi’s importance to the Windows community — Delphi, of course, being the immediate ancestor of Kylix. The historical parallels are remarkable.

On Valentine’s Day in 1995 a little software shop called Borland International released a product called Delphi, and Windows programming was forever changed. While a lot can be said about exactly what made Delphi into the success it ultimately became, an argument can be made for Delphi owing its success to three key factors:

I was lucky enough to own not one but two front row seats to this revolution in Windows development. As a member of the Delphi team at Borland, I helped define, create, and launch the product into the market. As an author of the bestselling Delphi Developer’s Guide series of books, I was a part of the community that established the knowledge beachhead in the industry that provided the information folks needed to become effective Delphi developers.

Prior to the introduction of Kylix, the Linux development community found itself in a position similar to that of the Windows community prior to the launch of Delphi. Projecting Delphi’s keys to success to the world of Linux and Kylix, you find:

Kylix 2 Development is clearly written for developers by developers, with an eye toward giving Kylix programmers the exact information they require to first become productive with the tool, and then learn to make it sing for them in building more complex applications. The text is pithy and clear, and the code snippets provide great illustration for using Kylix and the Object Pascal language they way they are intended to be used.

The maxim stating that “history repeats itself” is clearly manifesting itself in the parallels between the successes of Delphi in the Windows world and Kylix in the Linux world. Kylix 2 Development provides one of the keys to riding this next great wave of developer productivity.

Index
Appendices – On the CD-ROM 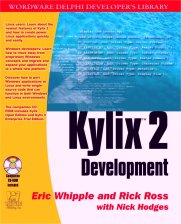 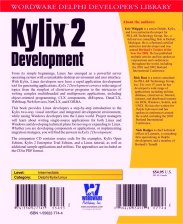